So we arrived at Brands hatch having had a tough time at Spa, but we knew that Brands hatch has always suited Seb and I so we felt like luck would have to turn in our favour now surely right?…

Wrong!…qualifying day arrived and the bright sunshine was perfect…right up until qualifying when a sudden what felt like a tsunami ensued,…this was less than helpful as The Bentley is at a disadvantage in the wet and thet showed as we only were able to qualify 5th overall. To add insult to injury, the moment qualifying stopped bright sunshine returned! argh!

However race day arrived and the sun was high in the sky and we knew that the fight was on.

I started badly dropping a place to Derek Johnston, however we had set the car up with low tyre pressures meaning that they would take a while to come into their optimum working temperature but would then be far more consistent than our rivals and this showed as within 5 laps I was back up into 4th and then I quickly dispatched Mark Farmers Aston Martin and set about chasing the Griffin Lamborghini. You could tell that there were team orders in place as the Lambo resolutely defended and despite my evident pace advantage it is very difficult to pass at Brands Hatch so i had to apply the pressure and wait for my opportunity.

As we caught a GT4 car I saw the only opportunity and threw the Bentley down the inside into Paddock Hill bend locking up over the bump on the inside but just managing to slow the car enough to make the corner! Job Done!…now to chase our championship rivals.

Heading out to the grid!

I quickly caught up the Minshaw Lamborghini and set about applying pressure. I was being very aggressive and forcing Minshaw to defend hard and run offline,…I knew it was only a matter of time before a mistake would come and sure enough into Druids he out braked himself and I made sure the Bentley exited the corner alongside him,..but John being John he kept his foot in all the way down to Graham Hill however I knew that If I was able to compromise his entry into the next corner I could force him wide and overtake on the ‘switch back’…this tactic worked perfectly and I was past and away!

Now I was in 2nd and chasing the Mcmillan Aston Martin who was going very quickly and it was reassuring to see that we were pulling clear of the field, however he then slowed with an engine problem and I was leading! Amazing! 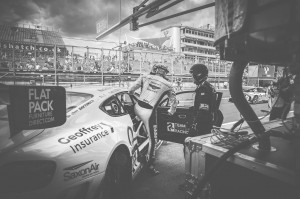 I then put my head down and continued to build the gap and by the time I pitted we had a healthy 25 second lead, Seb just had to bring it home, which is exactly what he did,..a clever measured drive meant we won by a healthy margin and with it had taken the Championship lead!

A fantastic result,…but now we would go on to the final round in the championship lead but with a 20 second success penalty, meaning we are still very much up against it, but we will fight until the very last lap!