The biggest win of my Life!!! – Silverstone.

The biggest win of my life!

So this was it, the biggest race of the season. The prestigious Silverstone 500 a 3 hour marathon that always ends up feeling like a very long sprint race where every single lap counts!

We came to Silverstone off the back of a very good test here and unlike Snetterton where the stop start nature of the circuit didn’t suit our car, Silverstone with its fast flowing curves was somewhere that we know the Bentley felt at home. 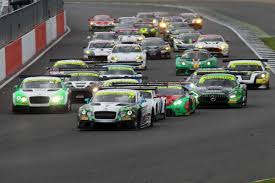 In FP1 and FP2 we ran a heavy fuelled car on very old tires, but even so the car felt great in the fast corners so we knew that when we added new tires to the mix we had a great race car for the weekend,…well as long as the rain held off, which in the last two years it didn’t!

However qualifying was dry and I went out and straight away flew to the top of the time sheets and qualified as fastest ‘am’ driver, I was pipped into second in the session by the Silver graded pro driver of the Mcmillan Aston,…something I fail to understand why a pro is allowed to qualify against ‘Am’s’…but ho hum! Seb then went out and solidified our front row…and we ended up missing out on a combined pole position by 0.09 of a second!!!! So incredibly close, however we were happy with a front row slot and to have qualified as fastest Pro/Am pairing. 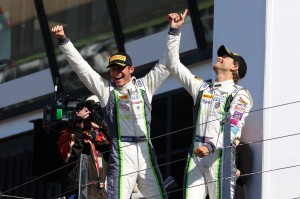 So race day dawned and as I looked out of my motorhome window I was greeted by bright sunshine…perfect weather! The morning was spent with sponsors and driver signings and it was great to see so many people come to see British GT, infact the police had to clear the pit lane walk about as it was so rammed and we were told to stop signing posters so that they could try and keep to the schedule despite a huge crowd around the Bentley Pit garage,…I cannot state enough what amazing support we have had from the fans this year, they are like the extra member of the team!

So it was time to put on my helmet and get down to business,…on the warm up lap I concentrated on getting heat into the tyres as I wanted to give myself the best opportunity to jump the Aston Martin off the lights,…but we also had a trump card up our sleeve, the night before our engineer Richard sat us down and explained a strategy he had been working on whereby we would do the opposite of what people expected us to do and run the car light with shorter stints so that we could gain a speed advantage on new tyres,…with this in mind we rumbled round the last corner on to the main straight and my eyes were glued to the lights, the moment they went off I was on the throttle and had evidently caught the Aston napping which enabled me to get to the first corner ahead,…from then on I settled into a good rhythm and set about building a gap, by the time I came into the pits 37 minutes later the gap was up to nearly 7 seconds, Job done!. 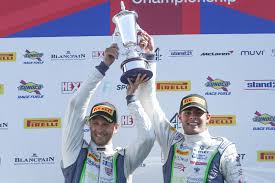 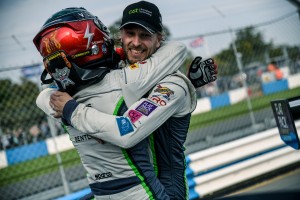 Seb took over with a light car and new tyres and went out against the bronze rated drivers who were only mid way through their stints…and we were taking up to 3 seconds a lap on the field so by the time he pitted after a great stint our lead was up to 36 seconds. I then went back out on track against the pros, who by then mostly had worn their tyres and yet I was light and had new tyres,…so even against the pro’s I was equalling their laps times and at some points was the fastest on track…it was all going perfectly….until I encountered the TF Sport Aston of Mark Farmer.

I had been catching him very quickly as as i got closer he was given blue flags which mean that a faster car is approaching as he should let me through, and seeing as we were lapping the Aston Martin the last thing I expected was that when I pulled alongside in the braking zone of stowe corner he would turn in on me and make contact…potential disaster!…Mark spun and I seemingly was unscathed bar a broken from dive plain ( aerodynamic wing ) and the car felt good so carried on…and to my relief the stewards saw that I was not at fault and so a brought the flying Bentley in for our final stop 54 seconds in the lead.

Seb rejoined knowing that we had a huge lead and drove a clever and measured last stint with us crossing the line 1minute and 3 seconds ahead of the field…a perfect race!

I Have to admit that the tears started to flow as I remembered my father being at this race last year behind the fence giving a huge smile and a thumbs up, and I knew that he would have loved to have seen this, so as Seb crossed the finish line I celebrated by pointing up to the sky and shouting ‘This one’s for you dad’….

To have won such an amazing race is something I will cherish forever, not only that but to awarded Blancpain driver of the weekend and to have also won the prestigious and hugely coveted RAC trophy is nothing short of a dream come true for both Seb and I.

However we are now only 4 point off the championship lead and we must now harness this momentum and take it forward to the iconic Spa circuit. We think that this should also suit the Bentley and we are all fired up to get another good result there…it’s all to play for.